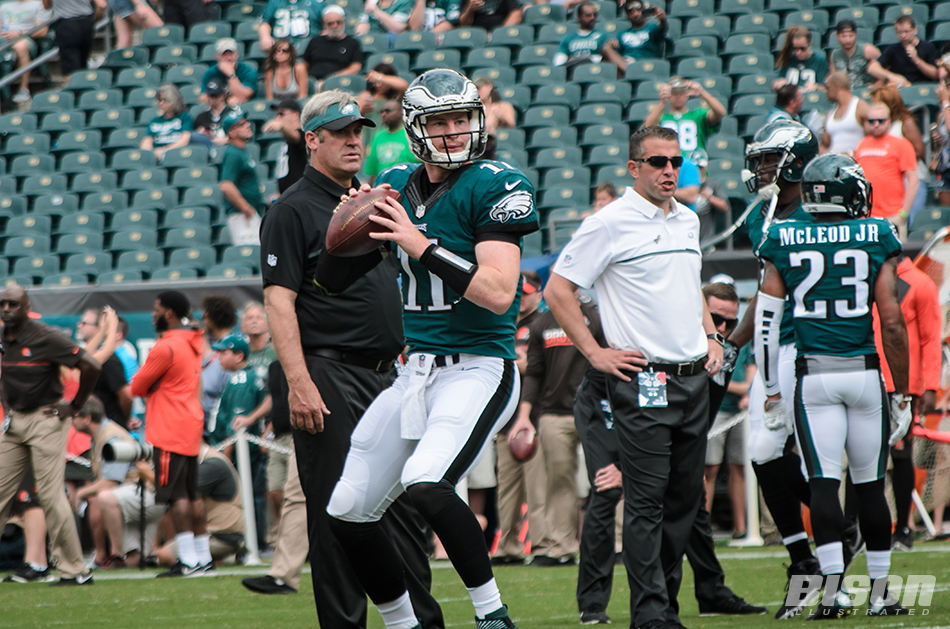 What’s the Vibe in Philly About Their New Quarterback, Carson Wentz?

Philly sportswriter Jimmy Kempski tell us what it’s like to cover Carson Wentz in the City of Brotherly Love, and what his expectations are for the young quarterback.

We spoke to PhillyVoice’s Jimmy Kempski a few weeks ago about Philadelphia’s starting quarterback Carson Wentz. Here’s what the witty Philadelphia sportswriter had to say about the former Bison quarterback.

Jimmy Kempski grew up a Philadelphia Eagles fan in South Jersey. He’s put his homer-ism aside and now writes about the Eagles for the PhillyVoice year-round. He breaks news and draws stick figures to illustrate his thoughts and opinions on the team. Kempski enjoys going back and forth with his readers online between breaking stories like the time linebacker Jordan Hicks hurt his hand on his honeymoon in Greece. Kempski has grown from the Voice of the Fans to thoughtful Eagles Insider.

Why does it seem like Philly fans have connected with Carson Wentz so easily?
Jimmy Kempski: “The one thing I thought was funny that he did, the (NFL) draft was in Philadelphia this year, and he was out in public with the fans. And there’s this one guy who was wearing a Dallas Cowboys hat, and he snatched his hat off his head and kind of threw the hat. Obviously, the Philly fans that were there went absolutely nuts that he did that. He gets it. He understands the fan base, I think. He’s opening up a little bit.”

Wentz doesn’t seem like this big personality who gives out fun sound bites looking for acceptance among fans. Is that going to help the fans remain patient with his development?

JK: “The weird thing about Philadelphia is that it’s very patient. You look at what the Sixers (Philadelphia 76ers) have done in the last three or four years where they’re intentionally losing, and a huge chunk of the fanbase—I would say the majority of them—like the idea of it. They’re fine with the long-term approach and being patient and building a winner, albeit in an odd way, but they’re willing to be patient and as long as they can see the light at the end of the tunnel. And I think that bodes the same way with Carson Wentz. He was a rookie quarterback. Rookie quarterbacks typically don’t put up crazy numbers their first year.”

Who is a bigger star in Philadelphia right now: 76ers’ Joel Embiid or Wentz?
JK: “I think Joel Embiid had more success in the games he was able to play, but Wentz has a full season under his belt. I mean, he (Wentz) plays for the team that is the king in the city of Philadelphia. But I’m going to go with Embiid. Embiid’s social media presence is already legendary. I think he may have the slight edge there, but he has a chance to be one of the best players in the NBA, and not that Carson doesn’t either, but I think he’s further away than somebody like Embiid is—with the huge caveat is that he has to stay healthy.”

What’s the Vibe in Philly About Their New Quarterback, Carson Wentz?

The Bison Are Back
What Do National Experts Think About Carson Wentz?